On July 1, 2016, Federal OSHA published a Final Rule to increase federal penalties as prescribed by Congress; Federal OSHA concurrently notified all state plans of their obligation to make an “at least as effective” change to state maximum penalties. Establishments located in states under Federal OSHA jurisdiction were required to comply with the new requirements on August 1, 2016. In October, 2016, the New Mexico Environment Department notified Federal OSHA of the State’s intent to seek legislation during the 2017 session to increase statutory maximum penalties in accordance with Federal law.

Senate Bill 229 (“SB 229”), signed into law on April 6, 2017, amended the Occupational Health and Safety Act, 50-9 NMSA 1978, to adjust maximum and minimum penalties in conformance with Federal law. The legislation conforms to the requirements of the Federal Occupational Safety and Health Act, the FCPAA, and Federal OSHA rules for approval of State occupational health and safety plans.

The penalty levels contained in the New Mexico Field Operations Manual, Chapter 6, Appendix A reflect increases to maximum and minimum penalties to conform with SB 229. This policy is effective for all citations issued on or after April 12th, 2021.

*Failure to Abate maximum penalties are applied per day

The Interim Enforcement Guidance Memo for the Respirable Crystalline Silica in Construction Standard was issued on October 19, 2017, OSHA will fully enforce all appropriate provisions of the Silica in Construction standard. The memorandum provides inspection and citation guidance, and it includes flow charts to assist compliance officers with evaluating employers’ control methods.

This new instruction provides guidance to the Occupational Safety and Health Administration’s (OSHA’s) national, regional, area, and State Plan offices for implementing and conducting an NEP to reduce or eliminate workplace hazards associated with the catastrophic release of highly hazardous chemicals at facilities, including petroleum refineries, covered by OSHA’s Process Safety Management of Highly Hazardous Chemicals (PSM) standard, 29 CFR 1910.119. Both programmed and unprogrammed inspections associated with this NEP will begin on May 1, 2017 in New Mexico.

Other changes include allowing employers to use rope descent systems up to 300 feet above a lower level; prohibiting the use of body belts as part of a personal fall arrest system; and requiring worker training on personal fall protection systems and fall equipment. 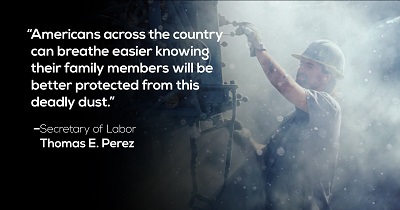 “The previous exposure limits were outdated and did not adequately protect workers,” said OSHA Assistant Secretary Dr. David Michaels. “Limiting exposure to silica dust is essential. Every year, many exposed workers not only lose their ability to work, but also to breathe. Today, we are taking action to bring worker protections into the 21st century in ways that are feasible and economical for employers to implement.”

About 2.3 million men and women face exposure to respirable crystalline silica in their workplaces, including two million construction workers who drill and cut materials such as concrete and stone, and 300,000 workers in operations such as brick manufacturing, foundries and hydraulic fracturing. OSHA estimates that when the final rule becomes fully effective, it will save more than 600 lives annually and prevent more than 900 new cases of silicosis – an incurable and progressive disease – each year. The agency also estimates the final rule will provide net benefits of about $7.7 billion per year. 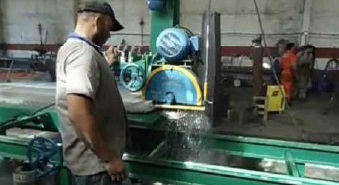 A worker cutting granite using a saw that applies water to the blade. The water reduces the amount of silica-containing dust that gets into the air.

Most employers can limit harmful dust exposure by using equipment that is widely available – generally using water to keep dust from getting into the air or a ventilation system to remove it from the air. The rule provides greater compliance assistance to construction employers – many of which run small businesses – by including a table of specified controls they can follow to be in compliance. The rule also staggers compliance dates to ensure employers have sufficient time to meet its requirements.

The final rule is written as two standards, one for construction and one for general industry and maritime. In addition to reducing the permissible exposure limit for crystalline silica, the rule includes employer requirements such as limiting worker exposure through work practices and engineering controls (such as water or ventilation); providing respiratory protection when controls are insufficient; training workers; limiting their access to high exposure areas and providing medical exams to highly exposed workers.

For more information, see the news release—available in English and Spanish—and a blog post by U.S. Secretary of Labor Thomas E. Perez, which includes a video featuring one worker’s personal experience with silicosis. Visit OSHA’s silica rule webpage for factsheets, answers to frequently asked questions, and to sign up for email updates on compliance dates and resources.

On September 18, 2014, federal OSHA published a final rule for 29 CFR 1904.39 (see Federal Register Notice below) which expanded the list of severe work-related injuries that all covered employers must report to OSHA. The revised rule retained the requirement to report all work-related fatalities within 8 hours and added the requirement to report all work-related in-patient hospitalizations, amputations and loss of an eye within 24 hours to OSHA. Establishments located in states under Federal OSHA jurisdiction were required to comply with the new requirements on January 1, 2015.

New Mexico OSHA determined it would seek amendment of the incorporating state rule (11.5.1.16 NMAC) prior to adopting the federal rule change to eliminate potential confusion regarding the exception language in Subsection B of the state rule. The Environmental Improvement Board (EIB) heard the requested rule change on May 15, 2015 and approved the change with a publication in the New Mexico Register on June 16, 2015 (see link below) and an effective date of July 16, 2015.