The comment period on the draft rule has been extended until September 16, 2020. Visit the Ozone Attainment Initiative webpage to view the comments received from stakeholders.

NMED-AQB has embarked on a new Ozone Attainment Initiative (OAI) for attainment and maintenance of national ambient air quality standards for ozone in areas for which design values exceed 95% of the standard. Pursuant to 74-2-5.3.A.

In October 2015, the federal government lowered the National Ambient Air Quality Standard (NAAQS) for ozone from 0.075 parts per million (ppm) to 0.070 ppm. Ozone data collected by the New Mexico Environment Department (NMED) from 2013 through 2015 show that two locations were not meeting the new ozone standard. The monitors located in the Sunland Park and Santa Teresa areas had levels of ozone at 0.072 ppm. Including 2016 monitoring data, ozone levels at the Santa Teresa monitor decreased below the NAAQS.

What are the NAAQS? The federal Clean Air Act (CAA) requires the EPA to set NAAQS for six common air pollutants found throughout the United States: particle pollution (particulate matter), ground-level ozone, carbon monoxide, sulfur oxides, nitrogen oxides, and lead. These pollutants are officially termed criteria pollutants. Criteria pollutants can cause harm to human health and the environment, and damage to property. EPA sets primary standards for these pollutants based on protection of public health. Secondary standards are set to prevent environmental and property damage.

What is ground-level ozone? Ground level ozone is the main ingredient in smog. It is created by chemical reactions between nitrogen oxides (NOX) and volatile organic compounds (VOCs) with sunlight as the driver. Hot, sunny days may produce unhealthy levels of ozone, especially in urban environments. Sometimes ozone concentrations can reach high levels in winter as well, especially where there is a lot of snow. Smoke from wildfires can also contribute pollutants that increase the formation of ozone. 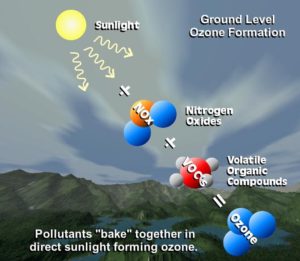 Sources of NOX and VOCs include industrial facilities, electric utilities, motor vehicle exhaust, gasoline vapors and chemical solvents. However, wind may transport ozone over long distances, so even rural areas may have occurrences of high ozone concentrations due to ozone migrating from areas with higher populations or more air pollution sources.

What is the difference between ground level and stratospheric ozone? Ground level ozone, the ozone for which EPA sets national standards, is harmful to human health and damaging to the environment and property.

Stratospheric ozone, on the other hand, occurs naturally in the upper atmosphere and provides a shield against excessive exposure to the sun’s harmful ultraviolet rays. 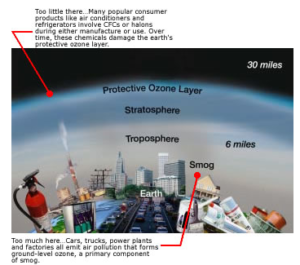 What are the health effects of ground-level ozone? Breathing ozone can trigger many health problems including chest pain, coughing, throat irritation, and airway inflammation. Ozone can worsen bronchitis, emphysema, and asthma and may harm lung tissue.

Who is at greatest risk from exposure to ozone? The people most at risk include those with asthma and other breathing problems, children, older adults, and people who are active outdoors. Also, people with certain genetic characteristics and people that don’t get enough of certain nutrients, such as vitamins C and E, are at greater risk of health problems from ozone exposure.

What is the ozone designation process? Within two years of setting a new or revised NAAQS, EPA is required by the CAA to designate areas as either meeting (attainment) or not meeting (nonattainment) the standard. If there is not enough available information to determine an area’s status, EPA designates that area as unclassifiable. States are required to submit their recommendations to EPA within 12 months of a new or revised NAAQS being finalized. EPA’s designations are based on data from air quality monitors, the state’s recommendation, and other technical information. Part of the state’s recommendation includes proposed boundaries for any nonattainment areas. EPA guidance for developing boundaries recommends that state air agencies consider air quality data from monitors, emissions, weather patterns, geography and land forms, and jurisdictional boundaries (such as counties, cities and towns).

What decision process was used for the recommended boundary? NMED followed EPA’s guidance to prepare our designation recommendation. Because research has shown that ozone is transported into New Mexico from Texas and Mexico, we took care to keep the recommended boundary as small as possible, and did not include any areas in the county where our data show that air quality meets the standard.

After designations and classifications take effect, state and local governments are required to develop plans that detail how nonattainment areas will attain and maintain the standards by reducing air pollutants. EPA classified the Sunland Park nonattainment area as marginal, allowing NMED 3 years to show that the area’s ozone levels will improve enough to meet the standard.

Are any other areas in New Mexico in nonattainment for the 2015 ozone NAAQS? No. The only nonattainment area in New Mexico is the Sunland Park area, based on monitor data from 2013 – 2016. This area is located near El Paso, Texas, and Ciudad Juárez, Chihuahua, Mexico. EPA chose to include more recent (2016) data in their final boundary decision; therefore, the Santa Teresa monitor is not within the nonattainment area boundary. All other monitors operated by NMED show compliance with the NAAQS, and have a recommended designation of unclassifiable/attainment. Areas without an ozone monitor have a recommended designation of unclassifiable. The public review copy of the Department’s recommendation can be found here: 2015 Ozone Designation Request.

How does NMED know the data are accurate?  NMED monitoring site operators perform daily validation checks on each monitor, and each monitor undergoes quarterly maintenance and calibration checks. Monitoring data are also validated on a quarterly basis prior to submittal to EPA’s Air Quality System (AQS). AQS is a database that contains air pollution data collected by EPA and other federal agencies such as the National Park Service, and state, local, and tribal air pollution control agencies throughout the United States. The AQS also contains weather data, descriptions of each monitoring station, and data quality assurance/quality control information. These are the official data used for developing attainment/nonattainment area designations.

Real-time monitoring data that has not yet been validated by NMED may be accessed via the Monitoring link on the Air Quality Bureau’s home page.

What are the consequences for failure to submit designation and boundary recommendations? If NMED had not submitted a designation recommendation to EPA by October 1, 2016, EPA would have determined the nonattainment boundary itself, and the State would have lost its right to determine the boundary. EPA assumes that the appropriate boundary for a county with one or more monitors not in compliance with the NAAQS is the entire county. This means that all of Doña Ana County would likely have been designated as nonattainment for the ozone standard if NMED had not submitted a recommendation by October 1st.

How long will the area remain in nonattainment status? Before NMED can start the redesignation process, the nonattainment area monitors would need to demonstrate compliance with the standards for 3 consecutive years.  NMED can then petition EPA to make a “clean data” determination and prepare a maintenance SIP for submittal to EPA.  Maintenance periods can last up to twenty years or more depending on the area’s ability to meet the standard.  Once the final maintenance period is completed, a redesignation to attainment can be requested.

What are the next steps? Now that the Sunland Park area has been designated nonattainment, NMED is working on the planning elements required for a marginal nonattainment classification, in the form of a State Implementation Plan revision that outlines the strategies and emissions control measures that are expected to improve air quality in the area by May 8, 2021. These strategies and emissions control measures would aim to reduce the amount of nitrogen oxides and volatile organic compounds emitted to the atmosphere. They may rely on current or upcoming federal rules, new or revised state rules, and other programs, such as the New Mexico VW mitigation plan projects.

Who can I contact if I have questions or for more information? For questions, please contact Michael Baca with NMED’s Air Quality Bureau at 505-476-4359, or by email at michael.baca1@state.nm.us.

The Air Quality Bureau maintains 15 ozone monitors across the state. Real-time data can be accessed here.